> Hg N3a4-B535 (Fig. 3b) is common mostly among Finnic (Finns, Karelians, Vepsas, Estonians) and Saami speaking populations in North eastern Europe (Supplementary Table S3). The highest frequency is detected in Finns (~44%) but it also reaches up to 32% in Vepsas and around 20% in Karelians, Saamis and North Russians. The latter are known to have changed their language or to be an admixed population with reported similar genetic composition to their Finnic speaking neighbors[36]. The frequency of N3a4-B535 rapidly decreases towards south to around 5% in Estonians, being almost absent in Latvians (1%) and not found among Lithuanians. Towards east its frequency is from 1–9% among Eastern European Russians and populations of the Volga-Ural region such as Komis, Mordvins and Chuvashes, but it is absent among Tatars and Bashkirs with an exception of Burzyansky District Bashkirs where the frequency is up to 5% (Supplementary Table S3).
>
> [...]
>
> Hg N3a4-B539 (Fig. 3c), on the other hand, is prevalent among Turkic speaking Bashkirs and also found in Tatars but is entirely missing from other populations of the Volga-Ural region such as Uralic speaking Udmurts, Maris, Komis and Mordvins, and in Northeast Europe, where instead N3a4-B535 lineages are frequent. Besides Bashkirs and Tatars in Volga-Ural region, N3a4-B539 is substantially represented in West Siberia among Ugric speaking Mansis and Khantys. Among Hungarians, however, N3a4-B539 has a subtle frequency of 1–4% (Fig. 3d), which is surprising considering their distant location from the core area of N3a4-B539. The sub-clades of N3a4-B539 (B540 and B545) (Fig. 2) have partly overlapping distribution areas with highest frequency peaks of hg N3a4-B540/L1034 (Fig. 3e) in the Ural Mountain region. B540 is more widespread and the most frequent among different sub-populations of Bashkirs in Southern Urals (up to 60%) and in West Siberia among Ugric speaking Mansis and Khantys (up to 27%). It is also present in Uralic speaking Nenets (7%) and Turkic speaking Dolgans (5%) but missing from Uralic speaking Nganasans and Selkups. Although N3a4-B540 is prevalent in Bashkirs it has a considerably lower frequency among neighbouring Tatars (3–5%).

> Another study reported excessive identical-by-descent (IBD) genomic segments shared between the Ob-Ugric speaking Khantys and Bashkirs but a moderate IBD sharing between Turkic speaking Tatars and their neighbours including Bashkirs[32].

> Tatar share moderate amount of IBD (3.55–7.35 cM per pair) with all neighbouring populations, while Bashkir share most of their ancient blocks (on average 8.62 cM per pair) with Khanty, a group of Uralic speakers from Western Siberia. We speculate that this disparity between cultural and genetic affinities of Tatar and Bashkir can be attributed to a phenomenon of cultural dominance: the population ancestral to Bashkir adopted the Turkic language during Turkic expansion from the east (language replacement event). 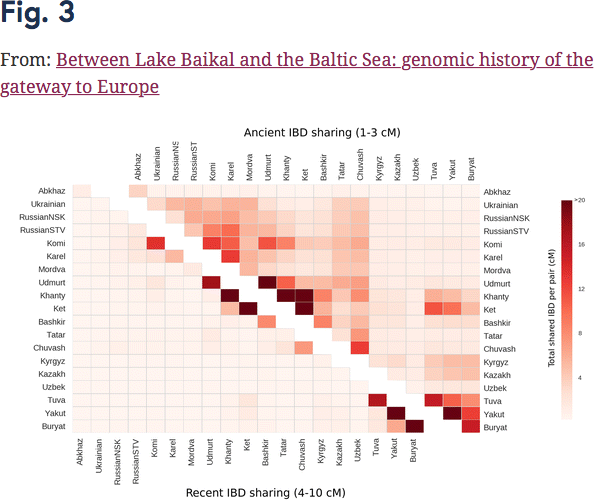 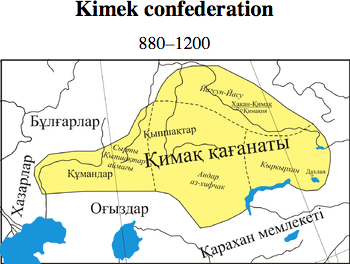 > While part of the Turkic Khaganate, they most likely inhabited the Altai region.[6] When the Khaganate collapsed, they became part of the Kimek confederation, with which they expanded to the Irtysh, Ishim and Tobol rivers.[6] They then appeared in Islamic sources.[6] In the 9th century Ibn Khordadbeh indicated that they held autonomy within the Kimek confederation.[6] They entered the Kimek in the 8th- or beginning of 9th century, and were one of seven original tribes.[8] In the 10th-century Hudud al-'Alam it is said that the Kimek appointed the Kipchak king.[6] The Kimek confederation, probably spearheaded by the Kipchaks, moved into Oghuz lands, and Sighnaq in Syr Darya became the Kipchak urban centre.[6] Kipchak remnants remained in Siberia, while others pushed westwards in the Qun migration.[6] As a result, three Kipchak groups emerged:[9]
>
> - Kipchaks of the Pontic–Caspian steppe.
> - Kipchaks of the Syr Darya, associated with the Khwarazmian dynasty.
> - Kipchaks of Siberia, later composing the Siberian Tatars.

> Chuvashes, the only extant Oghur speakers showed an older admixture date (9th century) than their Kipchak-speaking neighbors in the Volga region. According to historical sources, when the Onogur-Bolgar Empire (northern Black Sea steppes) fell apart in the 7th century, some of its remnants migrated northward along the right bank of the Volga river and established what later came to be known as Volga Bolgars, of which the first written knowledge appears in Muslim sources only around the end of the 9th century [40]. Thus, the admixture signal for Chuvashes is close to the supposed arrival time of Oghur speakers in the Volga region.

> For example, the present-day Tatars, Bashkirs, Kazakhs, Uzbeks, and Kyrgyz span from the Volga basin to the Tien-Shan Mountains in Central Asia, yet (Fig 5) showed evidence of recent admixture ranging from the 13th to the 14th centuries. These peoples speak Turkic languages of the Kipchak-Karluk branch and their admixture ages postdate the presumed migrations of the ancestral Kipchak Turks from the Irtysh and Ob regions in the 11th century [37].
Lähetä vastaus
Switch to full style